Learn To Learn To Fly

Tailwheel or that other kind of airplane with the wheel under the nose. Call 515-360-5235 for Paul Berge, CFII. Have Champ, Will Travel (with many fuel and pee stops).

Zen And The Art of Pumpkin Bombing

Invite Paul Berge To Speak At Your Parole Hearing 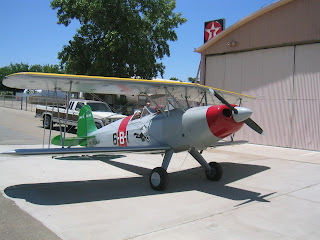 The following story, "Open Cockpit Mind" ©, by Paul Berge, was written in 2005 and updated in 2007. It was published in the Antique Airplane Association's magazine, Antique Airfield Runway, Robert Taylor, publisher (http://aaa-apm.org/ ), and tells of a trip Berge flew from Iowa to California and back in 2005. Photo above shows the Marquart Charger at Taft-Kern, California. Paul Berge in the rear seat and Curtis Kelly in the front. Photo taken by TSA security camera warning the non-flying public to be on the look-out for flying gypsies.
All rights reserved by the author and Ahquabi House Publishing, LLC. For reprint permission or for details on how to submit your aviation short story (you won't get paid so don't quit the day job) please contact Ahquabi House Publishing, LLC at http://www.ailerona.com/ or call 515-961-0654

Like blackened teeth in the lower jaw of a long dead titan, the mountain ridge northeast of El Paso, Texas blocked what I’d thought would be a shortcut to Carlsbad, New Mexico. But, whatever I’d thought in my former life before departing on this 4000-mile biplane ride rarely matched what the mountains and deserts viewed from an open cockpit had to teach. In short, there was no way I was getting over that ridge without a serious handshake from the ghost riders dancing among the craggy peaks.

It had begun two weeks earlier when I left Iowa in a Marquart Charger headed to Watsonville, California for its annual Memorial Day fly-in and spaghetti fest. I’d worked at that airport in the 1970s, and this was my first return flight. Doing so in a biplane seemed the perfect way to fly across both miles and time, only I didn’t realize how broad both spectra were. The miles, I could measure on charts that ripped apart in the cockpit’s wind, but above landscapes so wide the mind was sucked into unseen horizons that reworked all concepts of place and time. Looking back, now, the journey plays out as a mind movie where the reels are run in no particular order—a mountain landing in Ruidoso, New Mexico with density altitude at 10,000 feet shares the screen with a hellish fire bog called Blyth, California where triple-digit heat on a deserted air field made me feel as though I’d flown off the planet and into a place where rattlesnakes complained about the heat. Still, when all these disparate images are raked together, sorted, and laid end for end, the trip begins with a cool morning take-off from a small grass strip in Iowa and ends 45 flying hours later on the same turf but with a changed pilot re-educated by a truly amazing biplane.

Endurance:
The Marquart Charger, like many biplanes, isn’t known for its range. It’s designed to run about the sky on pretty days having fun. Cross-country trips are best planned with the knowledge that you’ll make lots of stops. The Charger holds 28 gallons, 27 of which are usable, divided among three tanks. The main holds 17 gallons in the fuselage forward of the front cockpit. It has an electric fuel gauge on the rear instrument panel and is accurate to within 15 gallons. Two five-gallon aux tanks are in the top wing. Each tank has a tiny filler neck, so the airplane was regularly flushed clean with avgas at each refueling. Reaching the upper tanks is an awkward balancing act when standing on a stepladder’s warning placard: Do Not Sit Or Stand…
With 27 gallons burned at ten gallons per hour, the Charger gets roughly two-and-a-half hours range if you don’t mind landing in the desert. I planned one to one-and-a-half-hour legs, netting from 100 to 200 miles depending on winds. Drinking bottled water en route assured that I wouldn’t be tempted to stretch that, although, over Santa Barbara when that extra cup of morning coffee called ready to leave, I seriously considered standing up to relieve myself while Curtis flew.
The fuel selector is located in the rear cockpit. I’d normally take off on the main tank, climb, and then level off and set power and mixture. Then, I’d switch to aux and hit the timer. Fifty minutes later—about one hour into the flight--I’d switch back to main where I knew I had at least an hour left plus a few gallons sloshing around in the upstairs tank. The longest leg I flew on this trip was 1:40.
I did run a tank dry over the Oklahoma panhandle. It’s surprisingly easy to do when you’re not paying attention and, instead, staring at a wind turbine farm below. The sound of coughing silence, however, gets the message across and with boost pump on it was only a few agonizing seconds before the engine growled back to life. A few more and my heart did the same.

The Route:
Headed across country you’re going to cross mountains at some point. I chose the southern route for several reasons, but mainly because in years past I’d flown two northerly routes via Interstate 80 and even further north along Interstate 90 through Missoula, Montana. Foul weather blocked these routes for the entire time.
The southerly route from Lubbock, Texas (home of the WWII Glider Pilots Museum) through El Paso, Lordsburg, Benson, Arizona, Tucson, Phoenix, Palm Springs, Banning, and across Los Angeles offered lots of fuel stops, easy-to-follow Interstate 10 (a comfort if the engine quit), plus lower terrain when compared to routes through Wyoming or even via Albuquerque along the old Route 66. High temperatures were a concern but just a few thousand feet above most terrain the air was smooth, and wearing tee shirt, shorts, and cloth helmet I was comfortable.
The scenery from up there was mind bogglingly stark yet beautiful, and I’ll admit at times it felt intimidating since I was used to lush green Iowa. I carried lots of water but I’d made the mistake of not drinking regularly on the first legs and found myself dehydrated—a syndrome that’s not automatically recognized but easily prevented.

Unto the Maw:
So, somewhere northeast of El Paso, Texas, after a week and a half in the Marquart Charger, I followed a highway across a vast expanse of dryness leading to Carlsbad, New Mexico my next fuel stop. On the map, the road bowed to the right but looking around the biplane’s nose I saw a wide valley dotted with green circles from pivot-point irrigation. The desert literally bloomed through here and beaconed for me to shave a few miles off my safety route along the highway and go direct. I veered away from the concrete ribbon and felt good following the lily pads across this sea of brown. To my right was a giant salt flat, a place that would drain all traces of moisture from any ill-fated traveler who landed there. To my left were miles of a New Mexico that routinely ate up conquistadors, silver prospectors, and Iowa lame brains like me with no respect for its harsh immensity and our own insignificance.
Ahead, the lily pads quit at the base of a mountain ridge where at the south end the blackened teeth of the long dead titan offered a foreboding specter. I checked the gas gauge and timers knowing I had plenty of fuel, especially with the tailwind, but the closer I came to the hills, the louder the ghost riders laughed until the lily pads disappeared and I saw I’d need to climb even higher to cross the last few dozen miles of earth that looked as though it hadn’t softened since whatever volcanic heave that created it had cooled millions of years before. And it was then I chickened out and turned toward the highway I’d abandoned miles back.
Green gave way to salt flats and then climbed into the rugged teeth of a ridge that loomed well above my head poking out from my tiny biplane shell. The wind pushed me along at groundspeeds over 150 knots, amazing for a boxy old pile of cotton, wood, and wire. As I paralleled the ridge headed for the left turn that would reconnect me with the relative comfort of the highway the thought dawned that whatever wind pushed me so smoothly along this ridge would likely prove amusing when I made the turn to the leeward side.
It was then the ghost riders laughed, and the wind hooked me around the mountain’s point like a scrap of litter swirling down a storm drain. Still smooth, the air seemed to reach a giant enveloping arm that turned me over the highway, and as I accepted the shove I felt the biplane sink—and not just a little.
The VSI pointed down 500 feet per minute and I cracked the throttle, which only amused the mountain, as the winds now tumbled in a wave across the ridge and sat like a crushingly soft weight on the biplane. No lenticular clouds, no dust, no mobile homes swirling past, just a blue sky dying over me, taking me toward the desert floor despite the biplane’s now full power climb and prayerful utterances from the cockpit.
Finally, when the ghost riders were fully amused and I’d turned to the safety of the flat lands to my right, the sky seemed to wink, as in, “Got yer attention, now, didn’t we?”
And I nodded politely toward the toothy ridge, giving a quick salute from a sweaty palm, and said, “Hey, I’m just learning.”
And the mountain let me, and the biplane, pass.
It would be three more days of dodging Kansas thunderstorms, scud running beneath foggy decks, and turning back when I was only 30 miles from home before the journey decided I’d learned enough…
For now.
The End
© 2005, 2007, Paul Berge, all rights reserved.
Posted by Paul Berge Rejection Slip Theater at 8:36 AM